Toyota has partnered with a top UK campervan conversion company to launch a compact, modern camper that won’t break the bank.

The 2016 Toyota Proace Camper, winner of the What Van? Medium Van of the Year award, has been transformed by UK campervan conversion company Wellhouse Leisure from a workaday cargo van into a sleek, compact camper called the Lerina, named after the Lérins islands off the French Riviera. Its name alone embodies the freedom and sense of wanderlust sought after by travellers and holidaymakers alike. 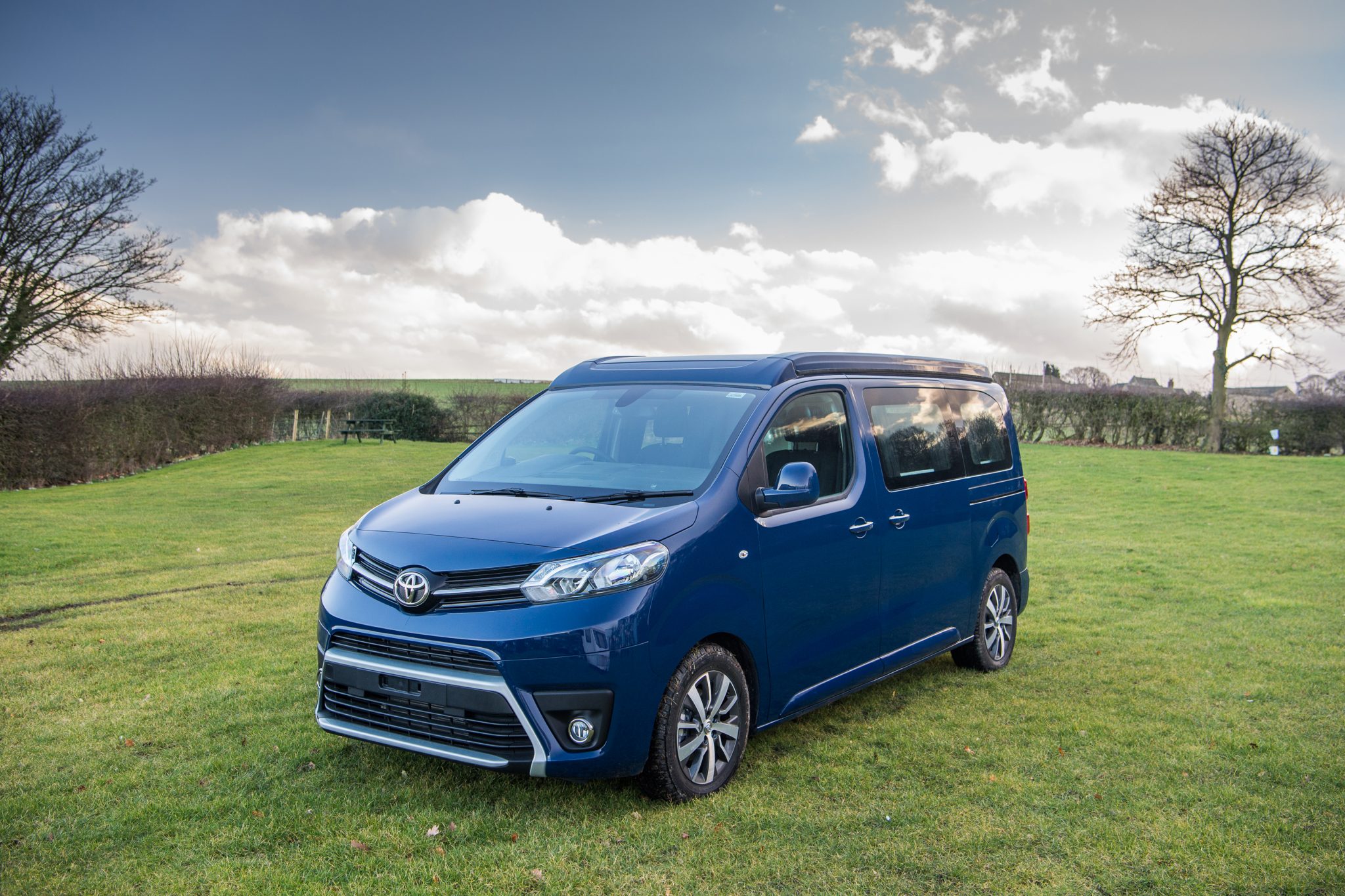 Although just a tad smaller than your average medium wheel base campervan at 4.95m long, 1.92m wide and 1.98m high, Wellhouse Leisure have managed to fit everything you need into the Toyota camper by maximising the use of space by equipping sliders on the rear seats, allowing you easily create extra storage space, a larger living space, or a double bed from the rear seats to suit your needs.

The van comes in eight colours with all the gadgets you’d expect in a modern van: keyless entry, air-con, built-in SatNav, cruise control, a DAB radio, electric front windows & mirrors… It’s even got a cooled glove box, for what exactly we don’t know- ensuring your chocolate doesn’t melt on a long drive, perhaps? 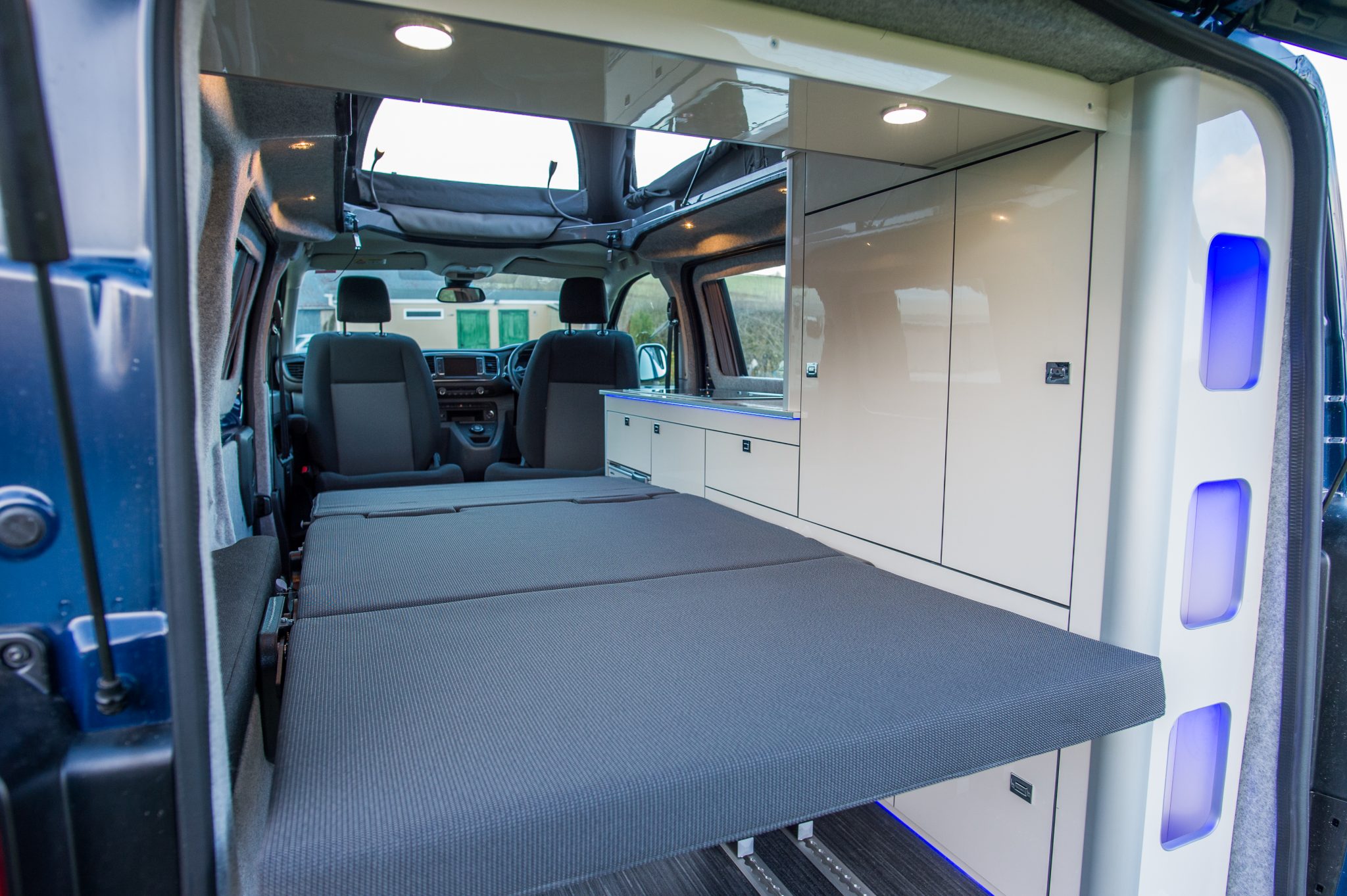 The Lerina’s back seats fold down to create a comfortable double bed.

You have a choice of two engines: the 120bhp 2.0 Turbo Diesel with 6 speed manual gearbox, or the 180bhp Automatic for an additional £2,250. Toyota claims the Proace range can achieve up to 54.3mpg, although it is unclear how the additional weight of the van conversion affects fuel economy.

Your optional extras are 17” spoke alloy rims, a 7” multimedia screen with SatNav, and for an additional £425 you can jazz up the outside with a metallic paint job. 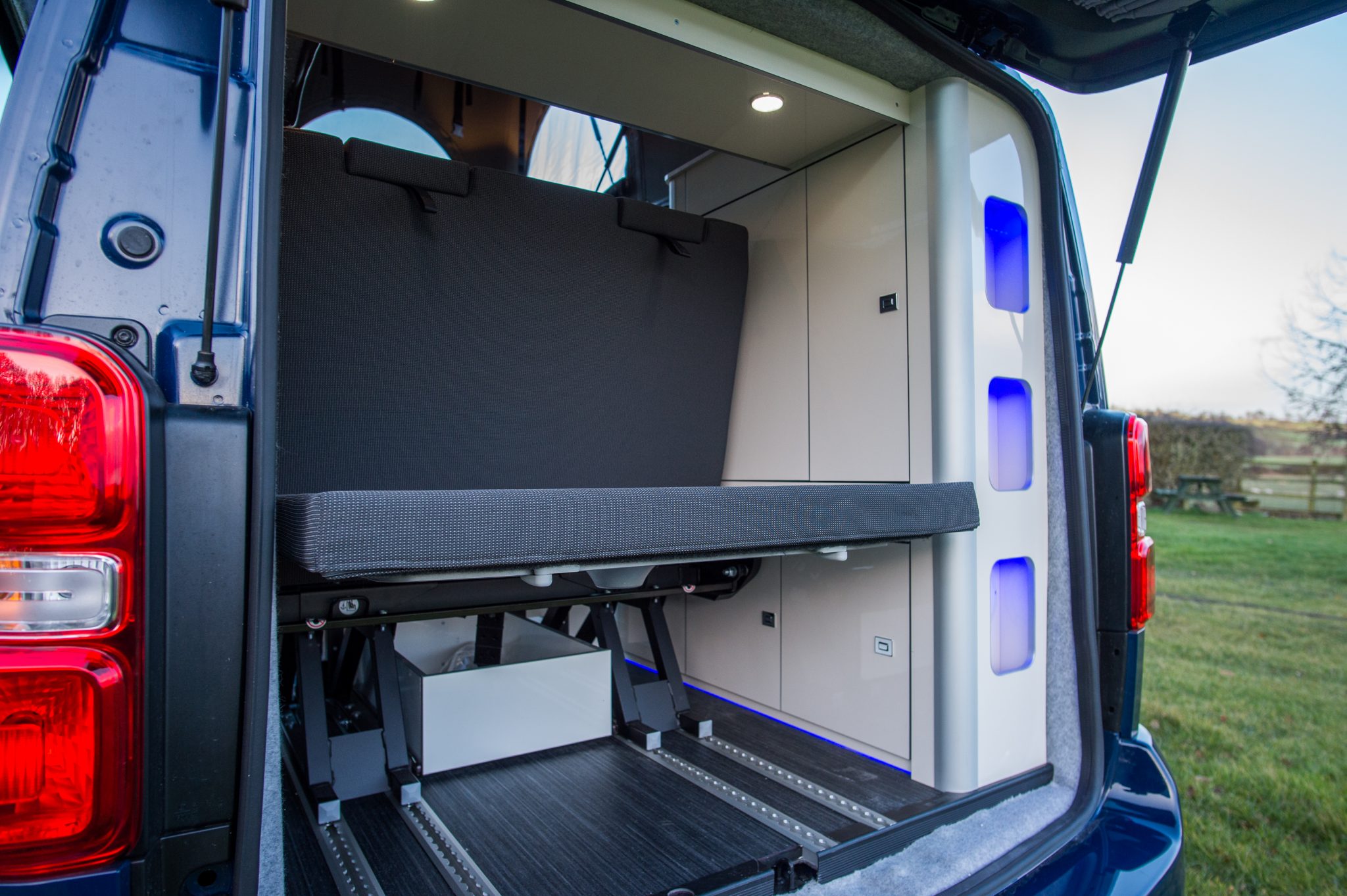 The Proace features a standard campervan layout with side kitchen, front swivel seats and a rock and roll bed, and bears a striking resemblance to a certain pop-top camper we all know and love, with the pop top itself being made by German manufacturer SCA.

It has a portable toilet, a wardrobe, curtains, a Vitrifrigo 25L compressor fridge, mains hook-up, a leisure battery, a sink and gas hob, both glass-covered, and an on-board fresh water tank of unspecified capacity. It also comes equipped with a 100W solar panel and a 2.2kW Eberspacher heater for those chilly nights camping in the highlands.

It boasts a modern look with sleek white fitted furniture and ample storage space, and the whole interior is finished off with blue LED lighting around the kitchen and at the rear of the storage compartment, adding a homely splash of colour and a touch of ultra-modern style. 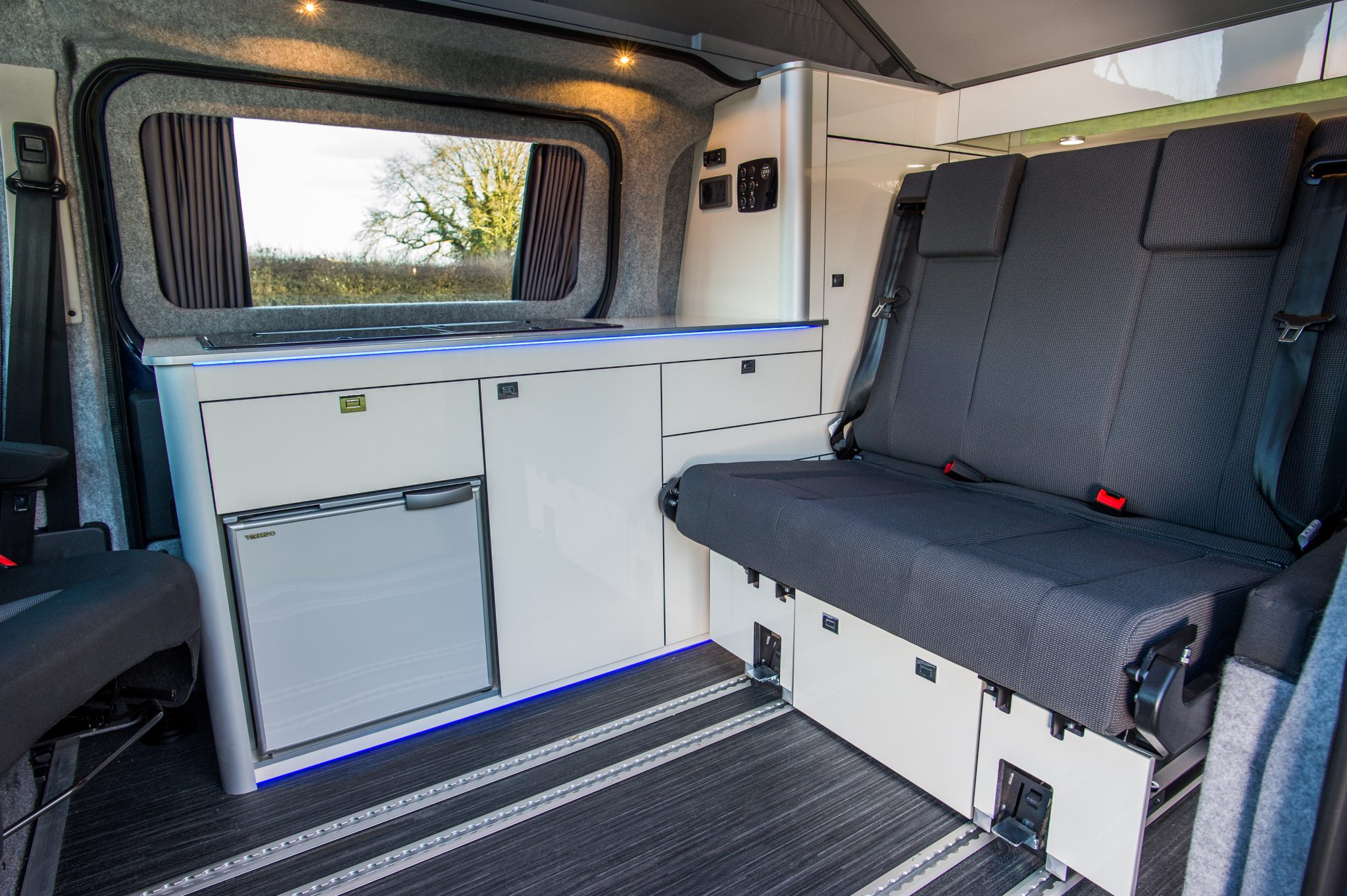 The sleek modern kitchen, complete with gas hob and fridge.

To sleep a family of four you’ll need the optional extra of a double bed in the pop-top roof, and while you’re at it you may want to add in additional seating for up to six people. If you fancy splashing out, Wellhouse Leisure can also install a side awning complete with LED lighting, perfect for starry nights and campfire cooking. 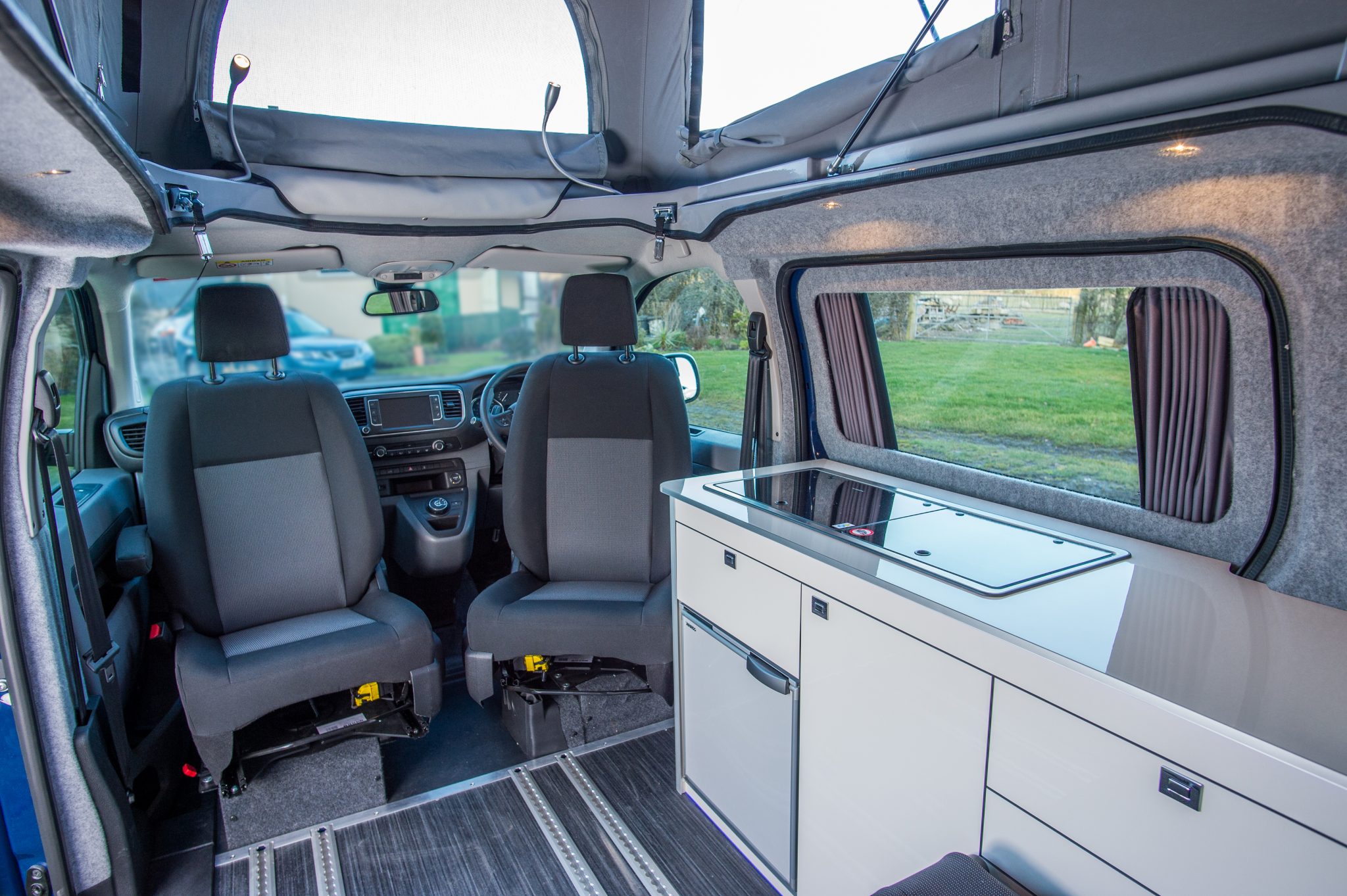 Sleeps up to four with the option of a pop-top roof bed.

So how much will this set you back?

The Toyota Proace camper is currently retailing from one of 12 dealers in the UK for £42,000 for the 6 speed manual, and £44,250 for the automatic- a reasonably affordable price considering how much van you get for your buck. The vans are assembled by Lunar Campers, and left-hand drive versions are already being shipped to Germany and across Europe.

With its versatile living space, light and airy interior and high-tech gadgets, the Toyota Lerina is an ideal campervan whether you’re a family of four on holiday or a couple heading out on your first road trip.

The Super Versatile Vanster Can Haul Gear, Change Layouts And Carry Up To Eight Passengers