The Lifestyle Changes of Van Dwelling

The Lifestyle Changes of Van Dwelling

Luke and I spent the last five years van dwelling inside a 450 sqft apartment that was filled to the brim with stuff. Some of it you might consider ‘essential’ while the vast majority was merely there ‘just in case’. This miniature air hockey set? That’s just in case one of our friends adopts a six-year-old child and none of us know how to entertain him/her. That unopened fifty-pound box of encyclopedias?

Someday the internet may disappear and we may be the only people in New York with a record of humankind’s achievements. We had assumed living in a Brooklyn shoe box was preparation enough for living inside our converted Sprinter van but when we finally committed to four months of living on the road full-time, we truly had no idea what it meant to ‘live small’.

Before our departure, we made a mental list of everything we wanted to accomplish while on the road before our journey began. It ranged from the fairly likely to the downright unbelievable. It didn’t take long for us to readjust our preconceived definition of van dwelling to the realities. Living a life on the road won’t change who you are. You will try, you will fail, you will test the limits of your patience, you will make adjustments. You will learn things about yourself and your partner you never expected and for better or for worse, whatever lifestyle you were previously used to no longer exists. Scary? I promise it’s not. The truth is, we are eternally grateful for the time we spent on the road as it’s altered more than a handful of our habits for the better. 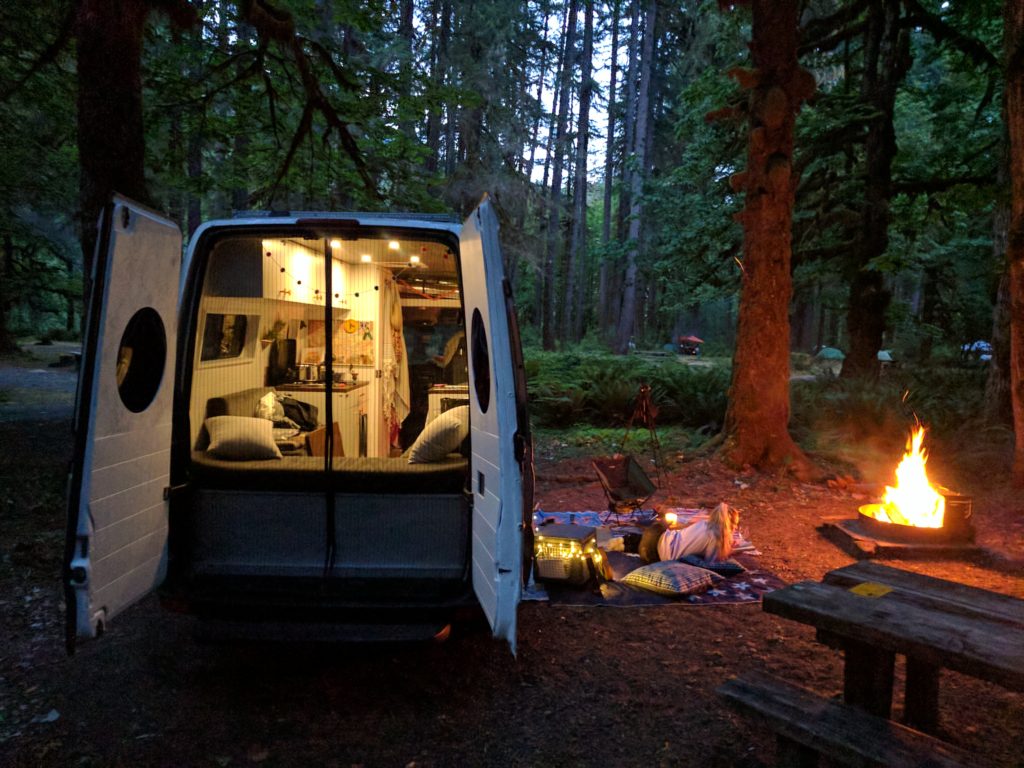 1. The idea of “expectations.” The flow won’t go with you, so you have to go with it.

When living in an apartment, house, condo or any other stationary home environment, you know what you’re getting. Heck, even if you aren’t fully prepared and a pipe breaks in your bathroom, you can call up your landlord or do some YouTubing. In a van, everything is new territory. While the web is an amazing resource, it isn’t a catchall when it comes to fixes. Murphy’s Law says something to the effect of, “if it can go wrong, it will.” We try to live that way so when things miraculously don’t spontaneously combust in our faces, we feel wildly fortunate. 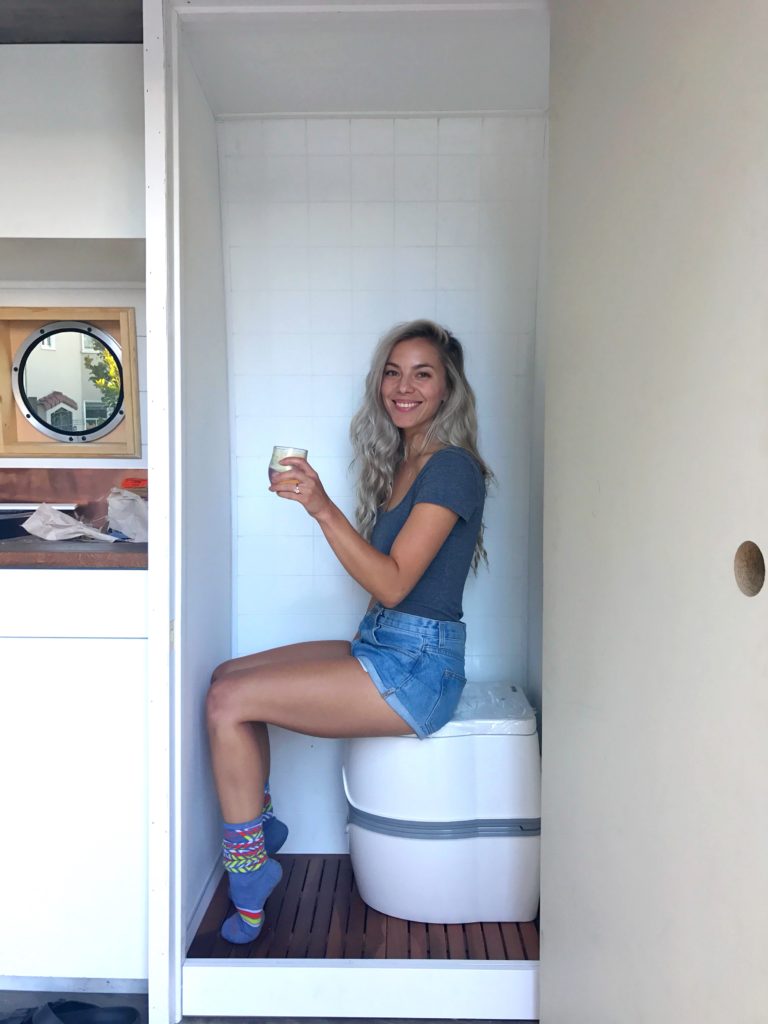 2. What it means to feel ‘clean.’ See number 1 and grab a moist towellete.

Tiny space means tiny bathroom. For most van dwellers it means no bathroom at all, let alone a shower. While we built our van with a private bathroom complete with waterproof walls for a camp shower, we’ve found in-van showers can be more trouble than their worth and we’ve had to redefine what it means to be clean. During days spent on the road we’re thrilled with our gym membership, a dip in a river, or quite literally, a damp washcloth. Again with those expectations…sayonara. 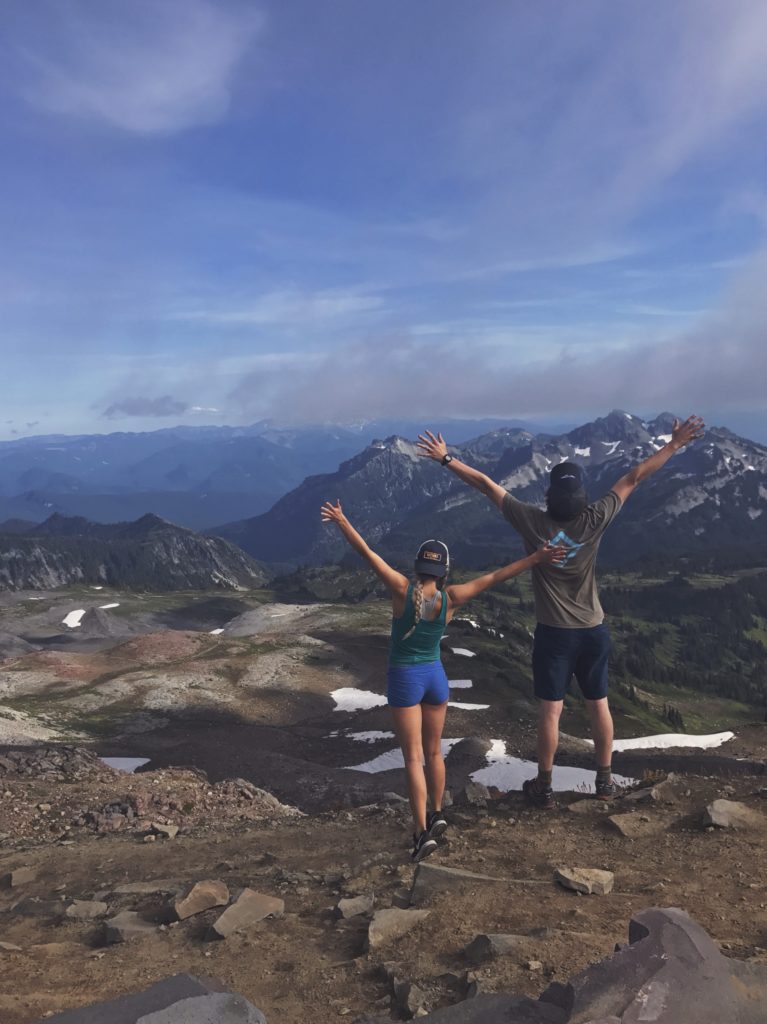 3. Being a gym rat. This hike definitely flexes every muscle in the body… right?

I love the gym. Always have. I’d go everyday if I could and I’d try and have a casual acquaintance with every frequent attendee and gym employee. One benefit of living in a tiny home on wheels is the ability to see so many places in a short period of time. On the flipside, you aren’t in one place for very long to build familiarity. If faced with the option of a one-hour workout or a one-hour hike, we’re going to choose the hike. We know the latter doesn’t always get the heart pumping but we figure it’s a different type of exercise- one that stimulates our brains and gives us an extra dose of those beautiful endorphins. Plus, we aren’t that fit couple that goes on runs together (no doubt it would end ten minutes in as we pass by a local spot with pinball) so we opt for quality time spent exploring instead.

4. Food is fuel. Simplicity is scrumptious.

We weren’t great cooks to begin with so naturally, we kinda sorta got even worse, at least in the creativity department. Our food will keep you alive but is it something we’d want to cook for our grandparents? Definitely not. In our previous kitchen, we had the storage space to house racks upon racks of spices, cookware, and recipe books. In the van, we used a cabinet. One cabinet. This cabinet stored all of our non-perishables and our cups. We bought items that could be used for a variety meals and we became pretty good at cooking four to five different dishes. We love bopping around various dive bars across the country, so for us, we prioritized this extra expense over fancy meals. Living in a van is a world of give and take but if you plan accordingly, you won’t feel like you’re losing a thing.

Wow. WATER. How did I ever take it for granted? We had a four-gallon fresh water tank and a two-gallon gray water jug. Yes, it’s incredibly annoying and we do not recommend. The beauty of this however is that we are able to see just how much water gets put down the drain. Want to boil pasta and vegetables? Choose one pot, boil one first and then fish out the contents so as to reuse that already steaming hot water. When washing dishes we put water into a cup and push ourselves to use fewer and fewer cups each time. While in a van you can never truly be in a rush so taking time to conserve this valuable resource has only done us well. 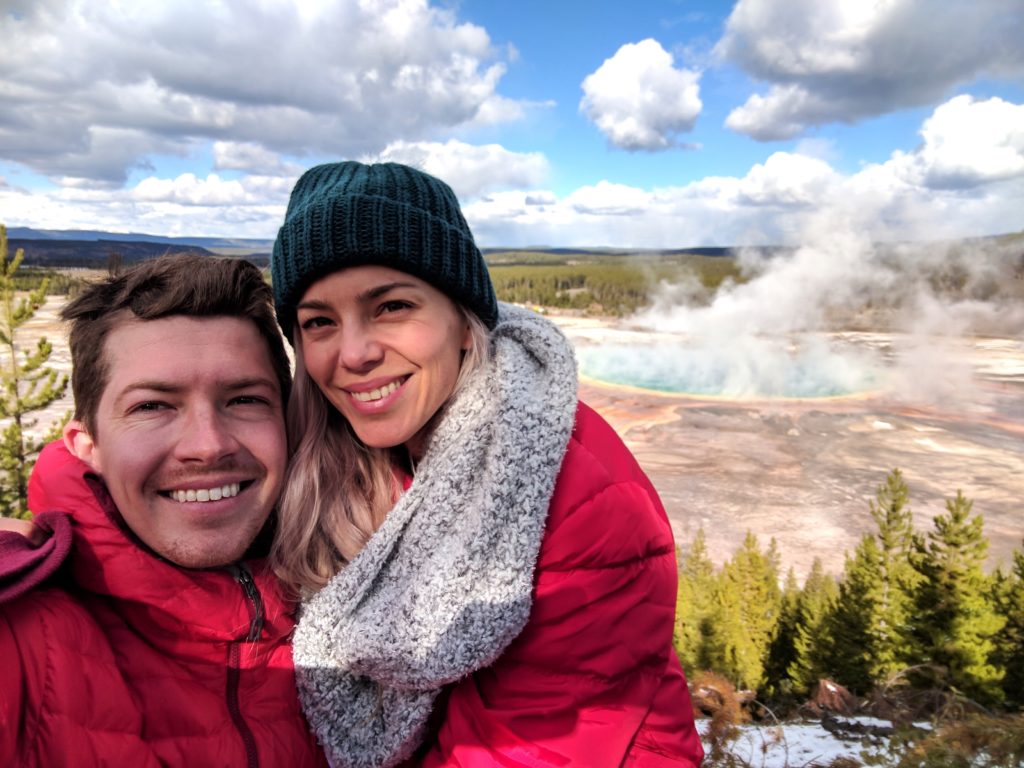 6. How we spend our money. Time to get creative!

Downsizing and skipping out on rent doesn’t necessarily mean you’re suddenly pocketing the entirety of your paycheck (pah!). We got rid of some square footage but consequently, our funds as well. Luke was able to work on the road but I’m an elementary school teacher who took time away from the classroom. With only one income, more funds allocated for gas, and the desire to shell out cash for once-in-a-lifetime activities (aren’t they all?), we needed to be selective about where and how we spend our money. In New York, we wouldn’t think twice about meeting our friends for dinner or going to the movies but on the road, we chose to trade those expenses in for a nightly game of cards, Boggle, an audiobook or an episode of a show we downloaded while flush with internet. We read more, talked more, and in general, became more comfortable with doing nothing. I think that’s the greatest gift of living in a van- feeling happy just being alive in our favorite space. 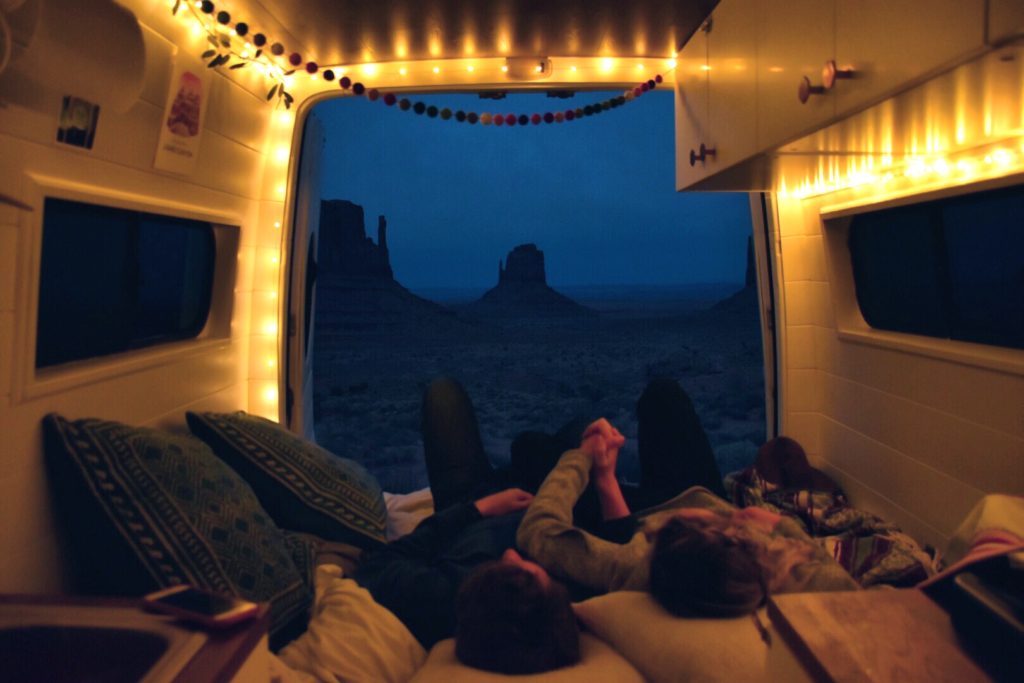 After a month of living on the road we started to realize just how much of our time we spent doing things out of laziness or for no reason other than we could (I’m looking at you daily shower). Our everyday New York City lives in retrospect made so many things easy and consequently allowed us to sink into the familiar and routine. While there is absolutely nothing wrong with this as I am quite the creature of habit, there is a reason why the idea of van life has become so appealing to the masses. We all want the freedom to travel on a whim and go where the wind blows but like anything we see online, that isn’t the whole story. You are giving up the ease of city living for a lifestyle that has its quirks as well as its perks. If you remember anything from this post, let it be numero uno: ditch all expectation and try and go with the flow. You won’t be disappointed. 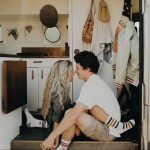 Lucas and Willa Via

We are two California kids who have bopped around San Diego, New York, San Francisco, and at one point the western half of the United States. During the months of August 2017 to December 2017 we lived in our self-converted Sprinter van named Roosevelt and loved every minute of it. We now spend as many weekends as we can out there on the road road exploring Northern California.