The Outdoor-Lover’s Camper Van With A Pop Top Cinema

The Outdoor-Lover’s Camper Van With A Pop Top Cinema

From the outside, you’d be forgiven for thinking that the Kompanja camper van is just your standard 4-berth pop top camper, because inside it’s packed to the rafters with ingenious little extras and a few key features which really sets it apart from the rest of the market. 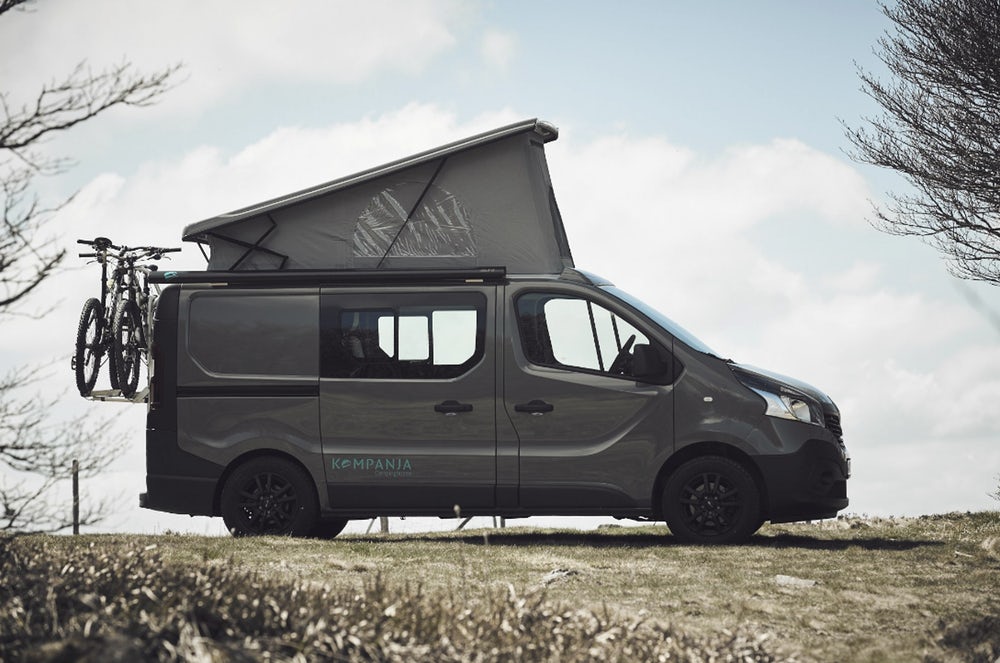 The Kompanja van, ready to hit the road.

It all starts with a Renault Trafic 123bph diesel (with an optional upgrade to 143bph). It comes with front airbags, rear parking assist, hill start assist, air con and bluetooth radio – everything to keep the family and friends safe and entertained on the road. There’s also the options of adding in a Satnav and LED daytime running lights.

In the back, floor rails create the ability to transform the space from cargo van to six seater to four berth camper. The dining area is created by swivelling the two front seats around to face the two rears, with a removable dining table that can be stored away when not in use. 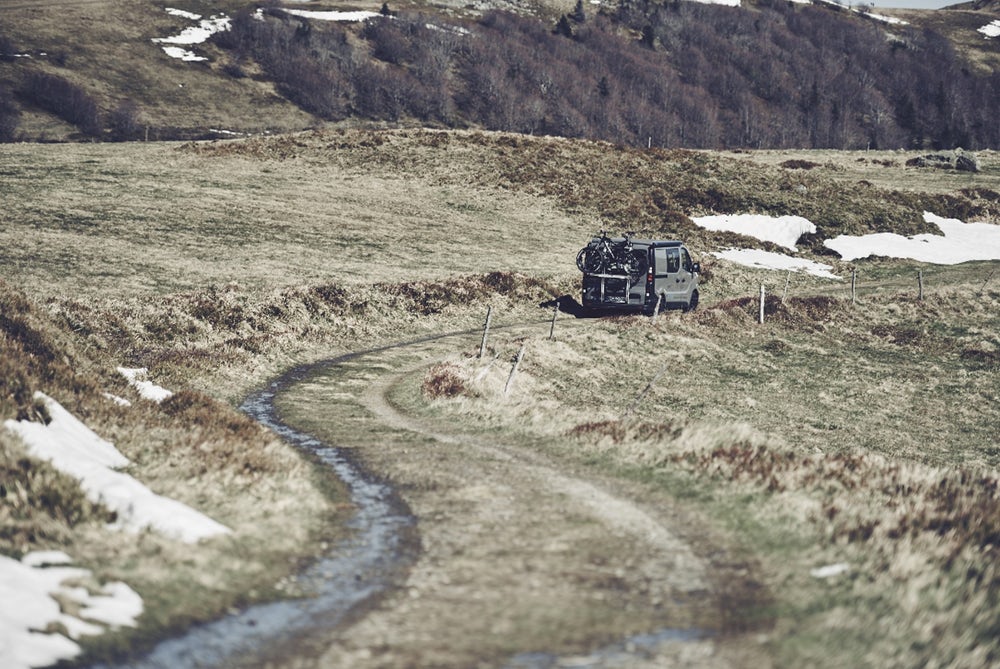 The van is fully equipped for any adventure.

Kompanja really makes the most of Renault’s small and boxy space, by choosing a fixed extendable bed over a rock n roll. The double bed folds into the living area over the two passenger seats, giving a fair sized 2m (79”) long sleeping space, with a width of between 1.28m and 1.68m (50” to 66”) depending on whether you choose to have two bedside cabinets, one, or none. The slightly smaller bed in the pop-top roof also sleeps two, and even when converted the van still has a sizeable cargo area beneath the fixed bed, ideal for storing outdoor gear, camping chairs or shoes, and there’s even the option of adding in a sliding under-bed storage drawer to maximise the space, which can hold up to 130kg. 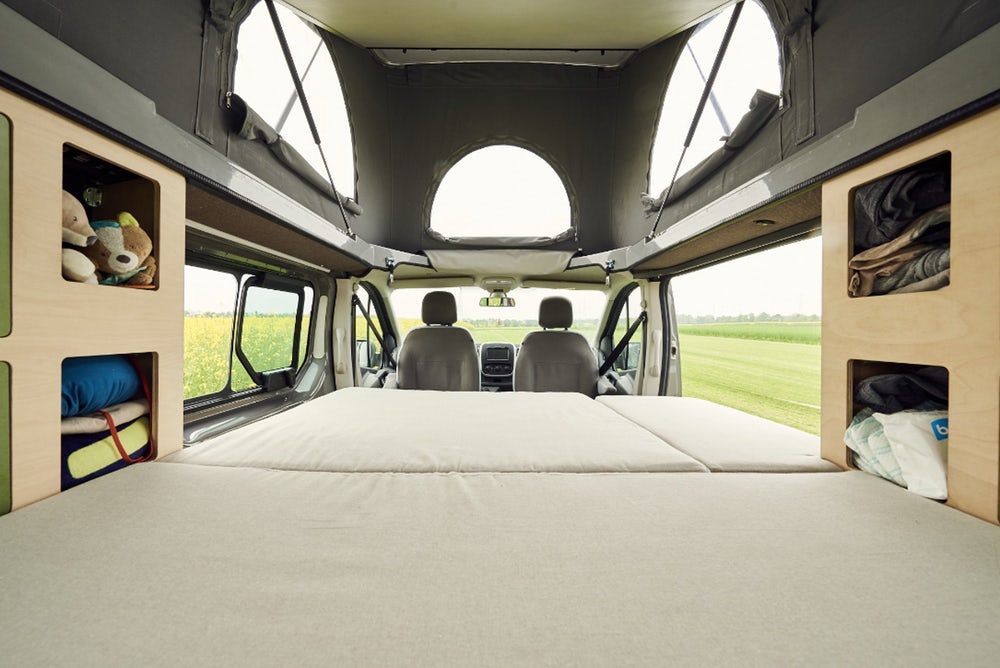 The large double bed, fully extended into the living area.

The van’s compact kitchen area sits just inside the sliding door so it can be used indoors or out. Kompanja has really thought about what makes a small space work well by mounting the 35L fridge on sliding rails for ease of restocking after a visit to the shops, as well as the single burner gas stove which also doubles as an extra work surface. The small table can be attached to the outside of the unit to create an even larger outdoor prepping space, and all of the cabinets are made from sustainable bamboo timber. 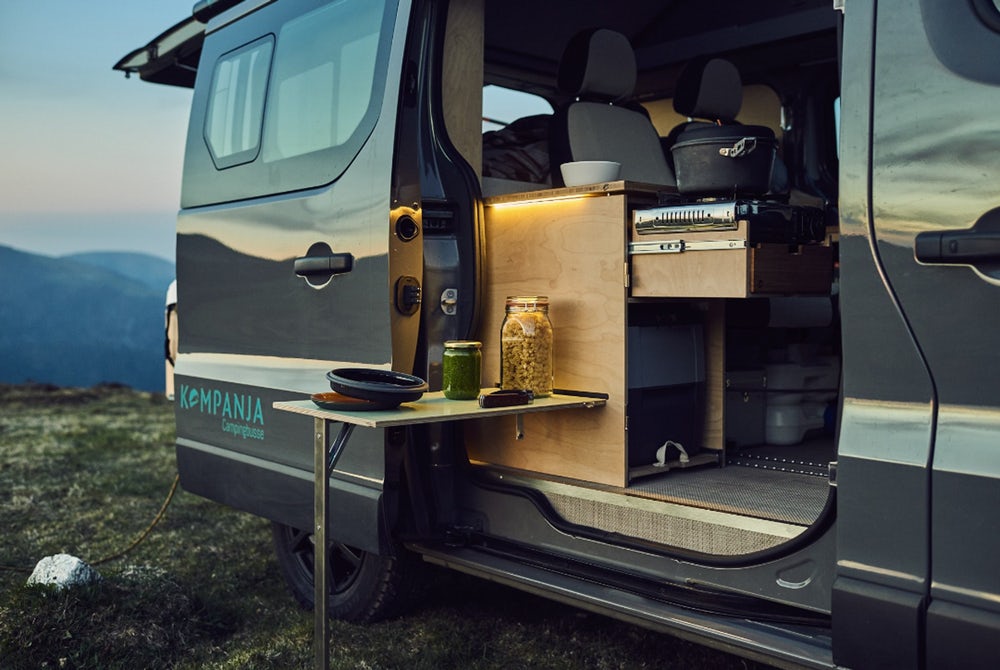 Take the kitchen outside or cook indoors, thanks to this flexible space.

You’ve got all your living essentials too: a 105-Ah AGM battery, 2x 12L water tanks and plenty of insulation, but this is where a normal camper van conversion would end and the Kompanja van just keeps on going. What really sets this van apart is not its clever use of space or its glide rail system, but its indoor projection system, and what Kompanja have dubbed the “Bivouac bed”.

The Bivouac bed extends out of the rear of the van to create an indoor/outdoor bed under the stars. Equally, you can also hook a tent around the tailgate to create an extended indoor space, and avoid those dreaded mosquito bites. The Bivouac bed will cost an extra €535 ($624), but it’s a great addition for outdoor lovers.

Now for the indoor lovers who very much enjoy snuggling up to watch a good movie at night: the “Bus kino” LG projector can be moved or set up anywhere in the camper van with its magnetic mount to create a cosy indoor cinema. The screen’s dual-sided display means it can be watched from both sides at once, and although it can be moved anywhere inside or out of the van, the configuration seen below with the screen in the pop top roof seems to work perfectly. The projector will set you back an extra €1,450 ($1680), and the pop top roof is also an added option. 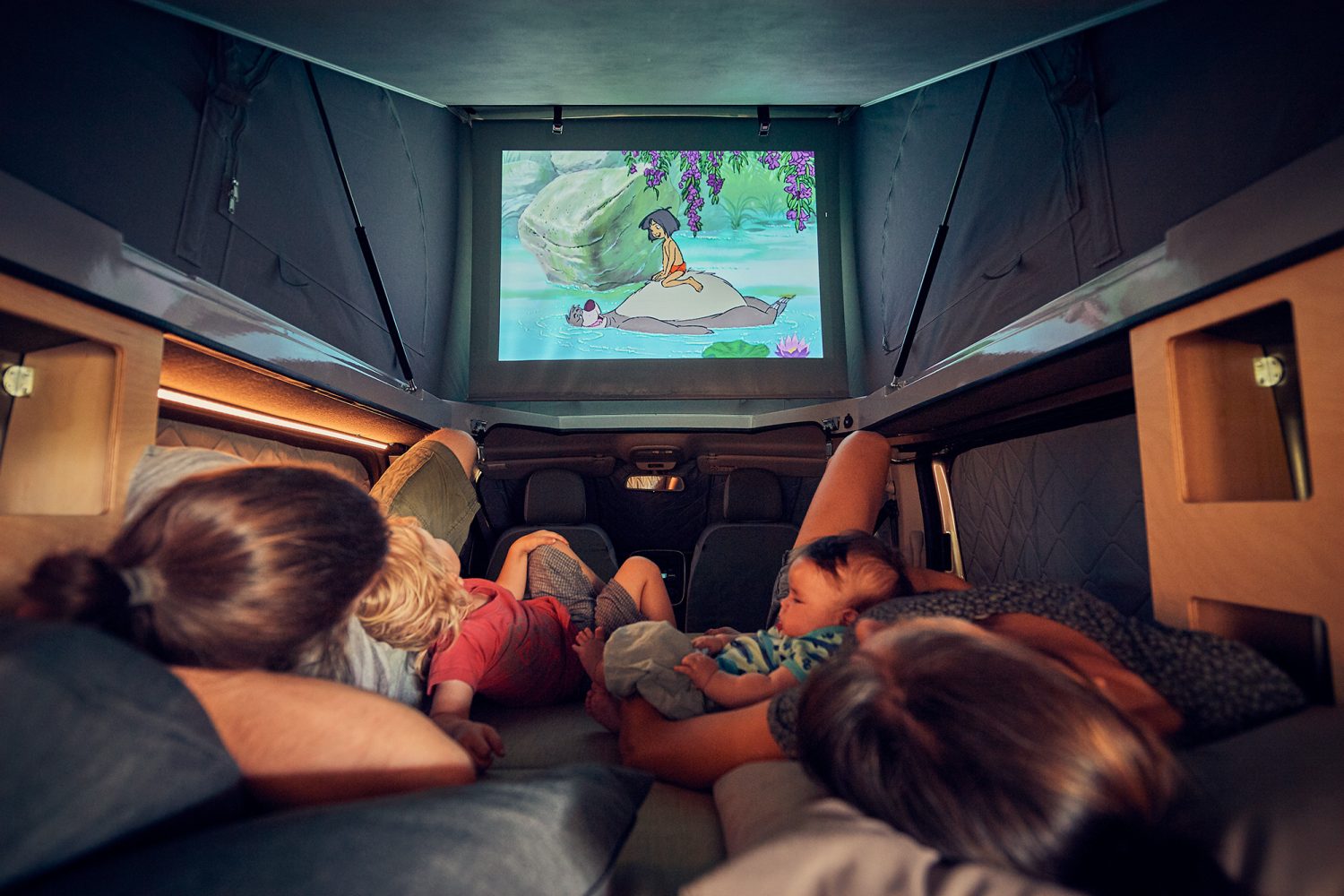 Kompanja gives a whole new meaning to staying in and watching a movie.

If this wasn’t enough, Kompanja have provided an almost overwhelming list of optional extras, from the every day- 100W solar panel, chemical toilet, seat covers and tinted windows, to the more extravagant- an Eberspacher Airtonic diesel heater, thermal window insulation, a GPS tracker linked to your phone or a 550W power inverter, to the exterior adventure gear- awning, roof rack, tires and rims or a bike rack. The combinations and possibilities are endless, but now we come to the inevitable question of price.

The basic van conversion with kitchen, bed, batteries, water tanks and cooking equipment comes in at a pretty reasonable €41,950 ($49,000), but start piling on those extras like the pop top roof and projector system and you’ll soon start piling on the pounds. Still, it’s refreshing to see a little van that goes that one step further, and packs a lot of clever space-saving versatility and innovation into a fun and sleek design.