The Expandable Apartment That Fits Inside A Van

The Expandable Apartment That Fits Inside A Van

Every van dweller and camper van holidayer knows that dilemma of needing to go to the supermarket but not wanting to drag your entire home along with you, and we are all too familiar with needing that extra bit of space. Hungarian designer Tamas Laczko knows this feeling exactly; in fact, he built an entire concept around it: the ioCamper, the world’s largest expanding camper van design.

Inspired by a family camping holiday, Laczko set about creating a self-contained holiday apartment that could be folded away into the space of a van during transit. He went from creating 3D designs to having a working model in just one year, and in June 2018 assembled a team of technicians and mechanics to make his vision a reality as they launched their IndieGoGo campaign. 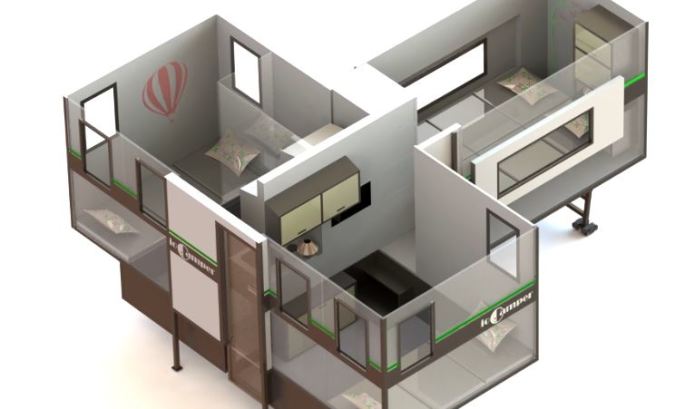 The concept design for the ioCamper, featuring four separate rooms.

It’s certainly an interesting concept, as even similar products on the market don’t expand to four times their original size; that’s enough space for four people with two living areas, a kitchen, bathroom, and a bedroom. It can be left attached to the van or completely removed to form a free-standing hard-walled mini apartment. The ioCamper measures 2.5m x 1.3m x 1.7m (8’2” x 4’3” x 5’6”) when folded up, and can fit in any L1 H2 van such as a Fiat Ducato, Iveco Daily, Volkswagen Crafter or Mercedes Sprinter. There will also be an option to customize it to fit H1, H2 and H3 vans, and to customize the exterior to suit your style, be that modern, vintage, country or summer. 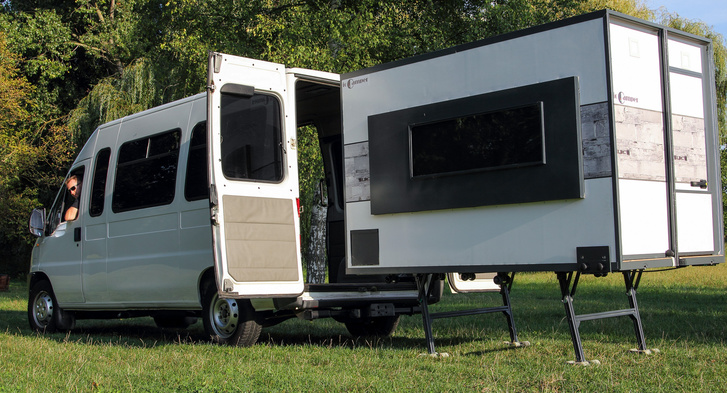 The ioCamper fits inside most standard vans.

Once expanded, which purportedly takes just 5-10 minutes, the ioCamper offers an interior standing height of 2.1m (6’9”) in a T-shaped layout. To expand it, once parked, the structural support beam is dropped behind the van. The ioCamper auto-extends out on top of it on rollers, controlled by a mobile device, and then the van is slowly driven forward to slide out the remainder and the legs are deployed. In the demonstration video, the two sides that form the rooms are manually folded out, although it is hoped that this process will eventually become automated, and the floor lowers automatically. The main living area houses the kitchen and bathroom along a center wall, and the room opposite houses the dining area and second bedroom. 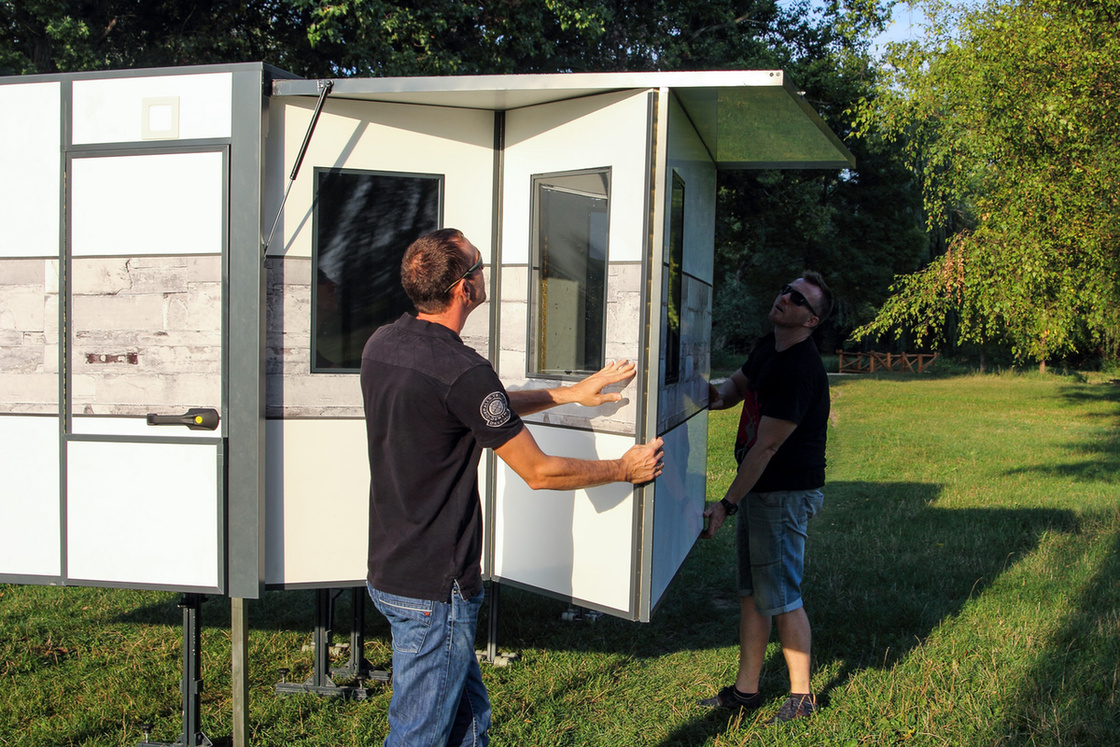 It can be deployed and unfolded in just 5-10 minutes.

Inside you’ll find the two separate living areas each furnished with a single bed and USB charging ports, although the larger of the two doubles as a lounge with a 23” touchscreen entertainment system, wardrobe, dining table and seats for four. The master bedroom contains a full sized double bed, TV with HDMI input for games consoles and laptops, USB charging and a large wardrobe. The bathroom is fully equipped with a toilet, sink and shower with wraparound privacy curtain, as is the kitchen with a sink, fridge, hot plates and storage. All of the components which can’t be flat-packed in transit are stored in the ioCamper’s center, which folds out to create the floor and which the walls fold flat against when packed down. 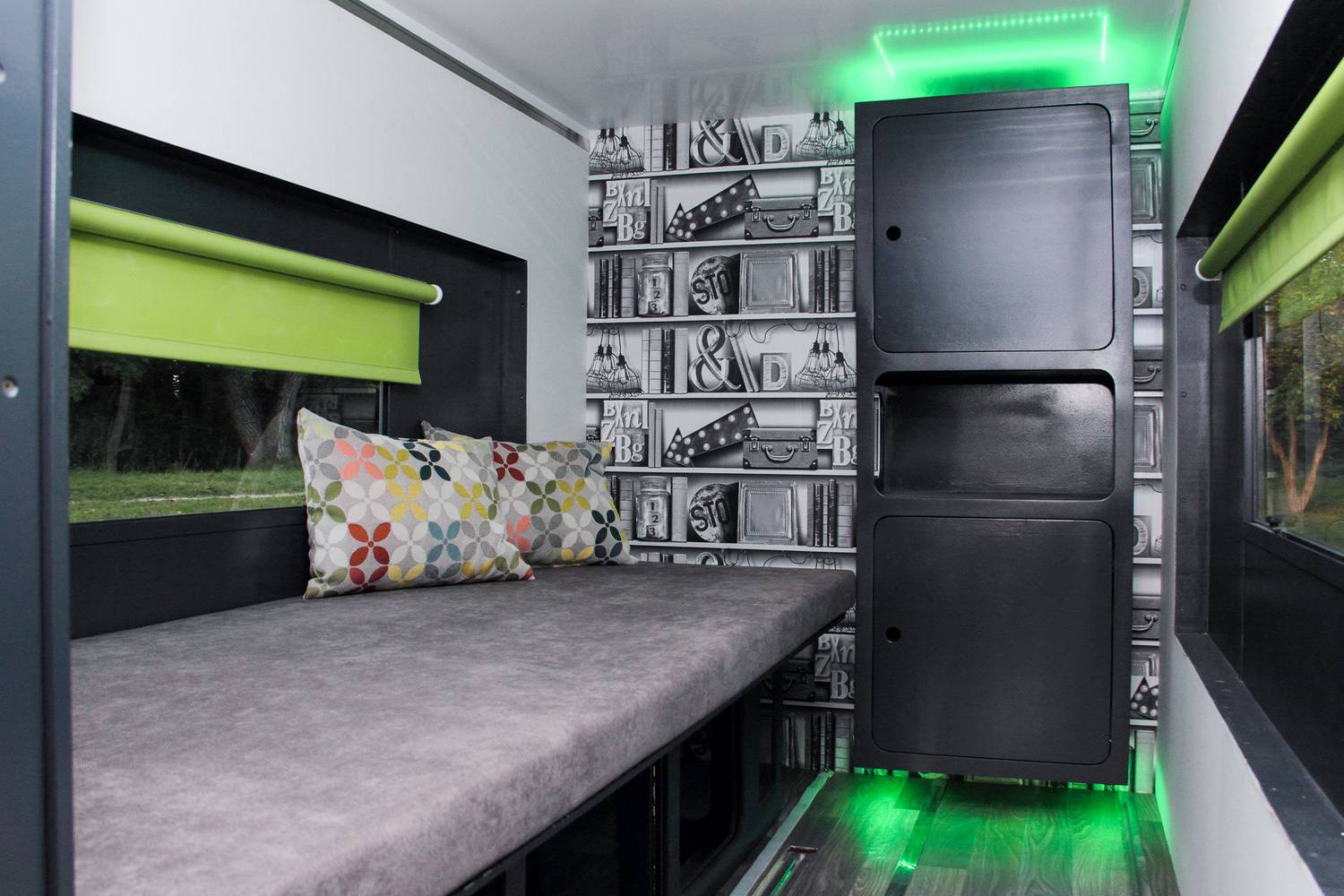 The unit also comes equipped with both AC and heating, solar panels, multicolor LED lighting, and a 23” infotainment system which monitors the battery status and fresh water level, and controls the temperature and appliances such as the fridge. 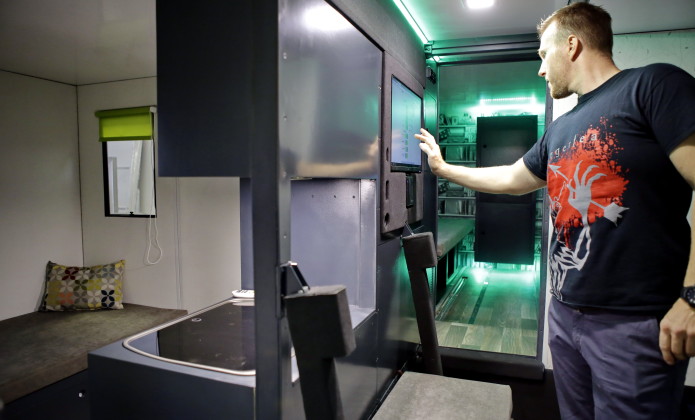 Everything in the ioCamper is expected to be controlled remotely or via a central control panel. 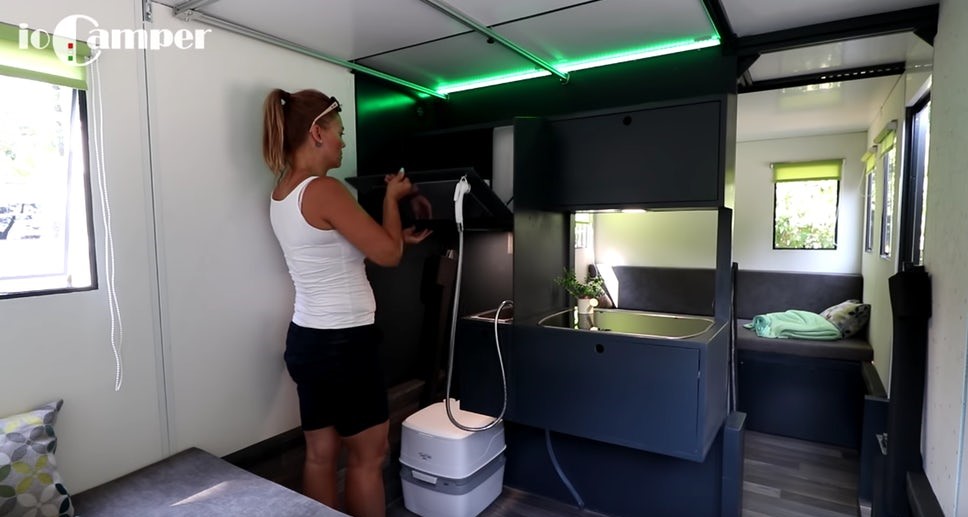 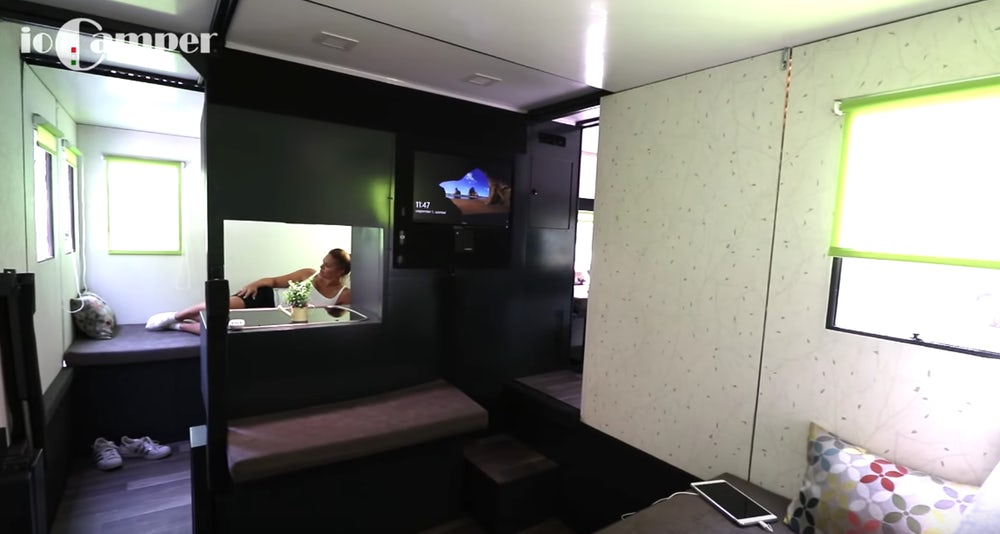 Production is hoped to begin in January 2019, but with the fundraising campaign still a long way off its goal it’s unclear whether the ioCamper will ever make it past the prototype stage, or what the price tag on it will be. With all of that technology and automation crammed in it’s sure to jack up the price, but will a high ticket item like this attract the right market of potential customers, who could surely afford a fully equipped motorhome with a tow-along car instead? Only time will tell, but the ioCamper could be an early pioneer, eventually paving the way for a whole range of expandable camper vans in the near future.