How much adventure can you cram into a 15.5ft long camper van? For the Campbell brothers, it seems the answer is a lot.

These two guys formed the company Caravan Outfitter and set out to build the US’s answer to small, multifunctional, affordable campervans that have saturated the EU market in recent years. They’ve managed to build everything you need and some enticing optional extras into a tiny Nissan NV200 to create the perfect multi-day adventure van. 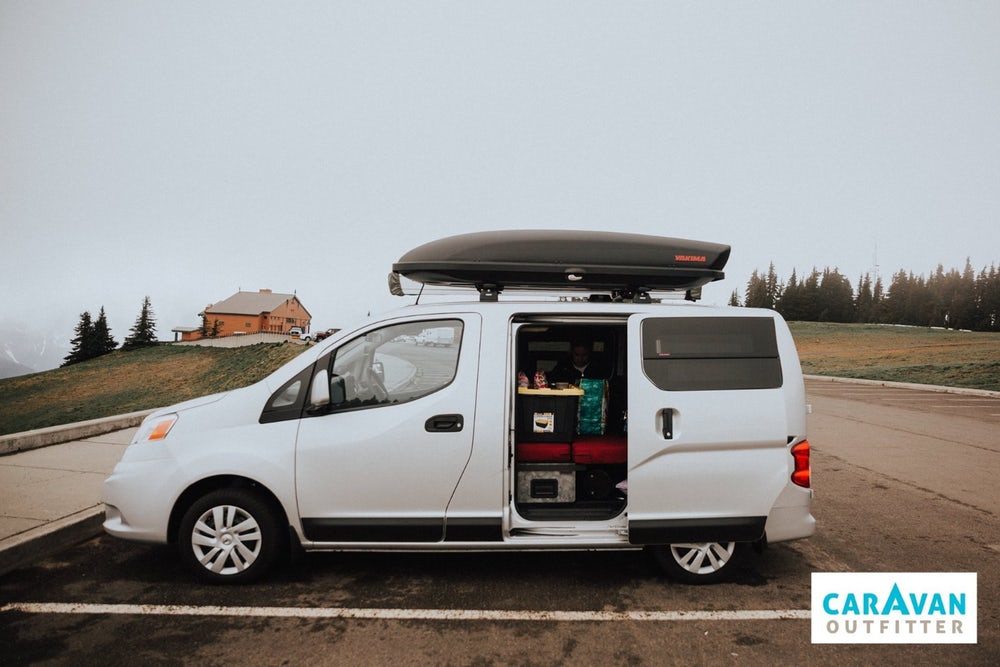 The Free Bird manages to squeeze a kitchen, bed and seating area into a tiny Nissan van.

The base vehicle, the Nissan NV200, contains a 131bhp 2.0L four cylinder engine that gets a respectable 25mpg, while its gross weight once converted comes in at a tiny 1,687kg (3,720lb). It comes with all the tech you’d expect- reversing camera, heated side view mirrors, cruise control and remote keyless entry. The van sleeps and seats two people, although up to 6 can squeeze in around the tiny dining table (apparently). The camper’s fabric also comes in a choice of three colours: brilliant silver, graphite blue and cayenne red, while the trim remains the same storm gray tweed cloth. 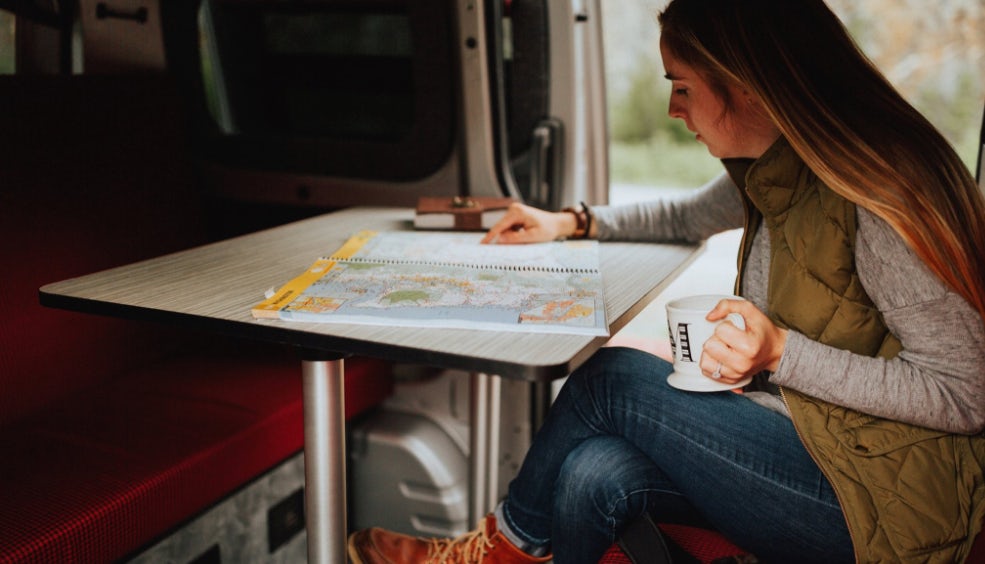 The campervan element uses a clever “slide and glide” floor system which allows it to double as both a cargo van and an adventure van as needed. The system is primarily made up of two storage boxes fitted onto glide rails behind the cab, one containing a kitchen, the other an AGM leisure battery and storage space. The cushions for the bed / seating area are also stored in these two boxes when not in use, thanks to their swing back frames.

During the daytime, the set-up can be configured into two bench seats and a dining table, and at night the table legs can be removed and the table top dropped down to create the middle section of a full-size 193cm (76”) double bed. Just pull the four mattress cushions over the top and you’re good to go. 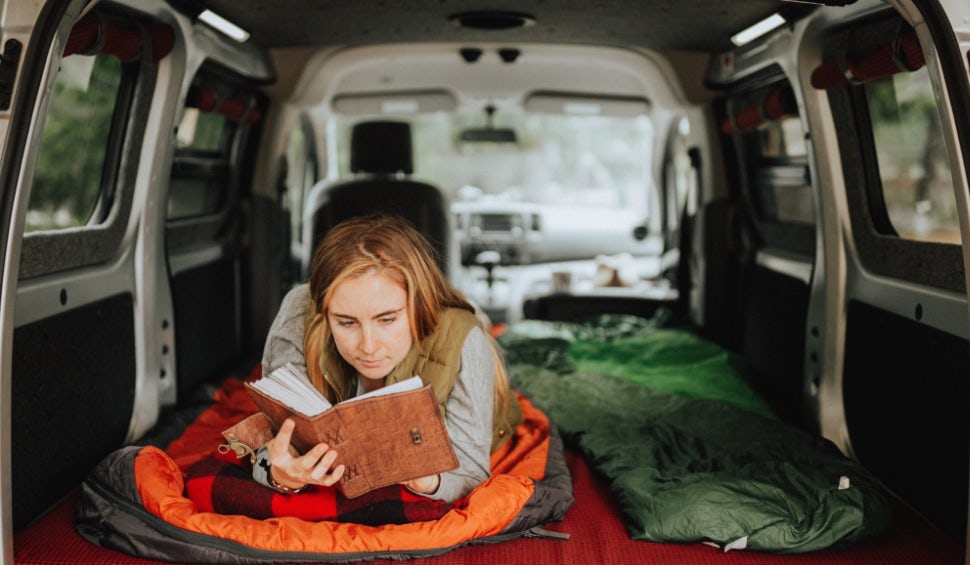 Interestingly, Caravan Outfitter decided not to go for the classic pop top roof which affords small campers that extra bit of standing room for cooking. Instead, they’ve moved the kitchen outdoors, accessible via the rear doors. Inside you’ll find just enough equipment to cook a meal for two: a removable single burner butane stove, which slides out on a surface that can be also used as extra workspace when the gas stove is removed. There is also a 29L fridge drawer and two storage drawers for your pots, pans and crockery. 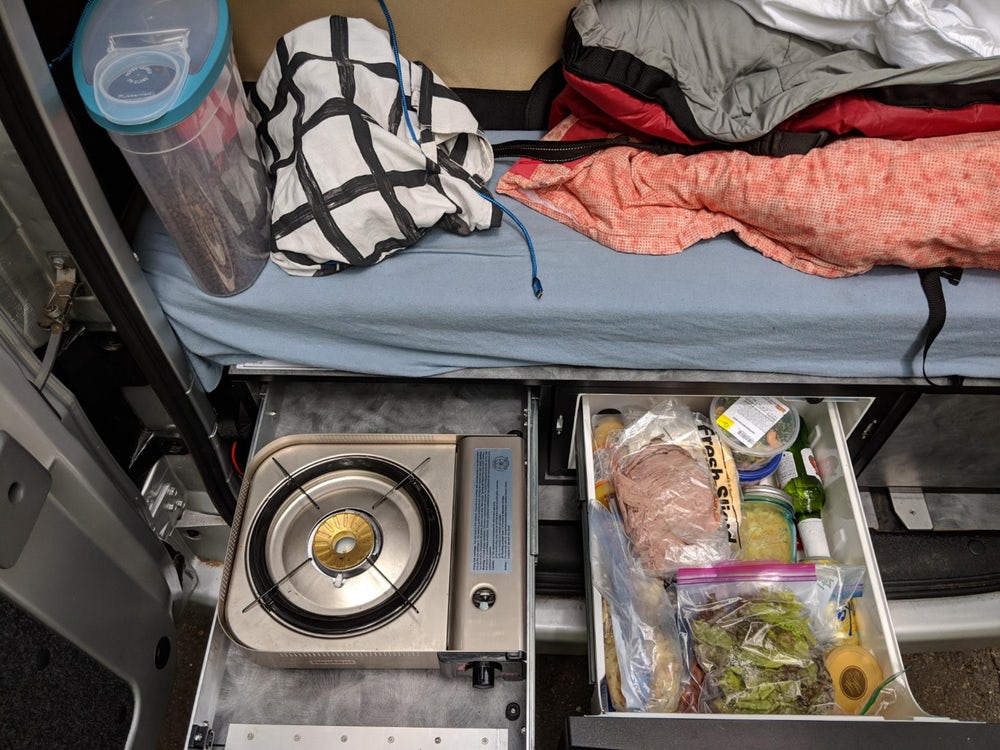 The kitchen fits snugly inside of one the van’s modular storage boxes.

This multipurpose campervan has also managed to pack in loads of essential gear, like recessed dimmable LED interior lights, dual USB charging ports, a 12V outlet, and for that all important ventilation at night they’ve provided screen-vented windows, a roof-mounted vent and an overhead fan for those warmer nights.

A battery isolation module separates the AGM leisure battery from the van’s starter battery so you’ll never have any issues starting off-grid, and a Battery Tender under the bonnet keeps its power topped up when at a campsite or at home.

Caravan Outfitters provides a whole range of tasty adventure-ready extras too: Thule crossbars, a Yakima roof box, bike carrier, 2” tow hitch, wraparound batwing awning, and even a sonar bumper warning system. Whatever your flavour of adventure, they’ve got you covered. 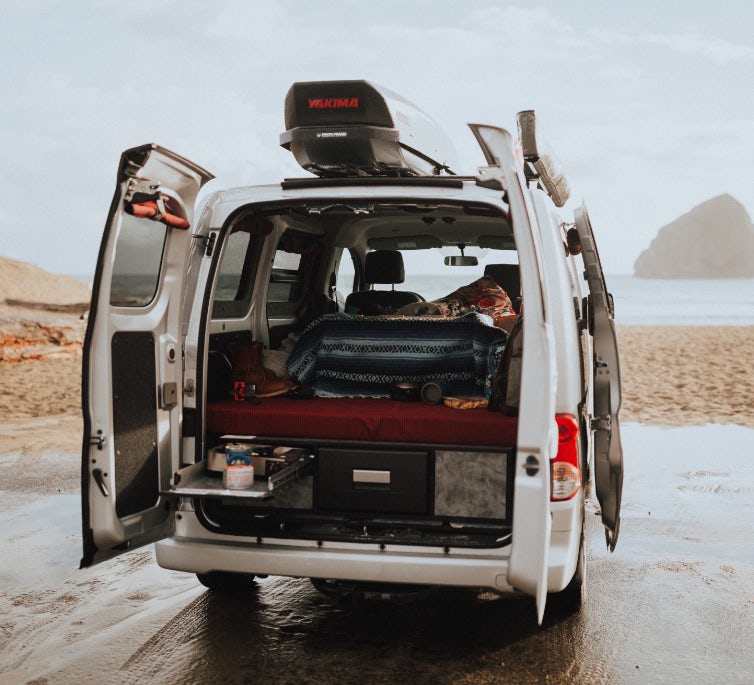 The Free Bird is expected to level the playing field for compact campervans in the US.

But how does the price of the NV200 Free Bird compare to its counterparts across the pond?

So the Free Bird sits comfortably as a mid-range, mid-budget camper, but importantly it is available in the US as a smaller, more economical option to the 45ft A Class RVs which will no doubt dwarf the NV200 on highways.

Caravan Outfitters are currently taking pre-orders for 2019, with deliveries expected to begin in December 2018.